NSHMBA Brillante Award at the National Conference in Minneapolis

Posted by Richard Velazquez in Awards, NSHMBA on October 18, 2009

According to the NSHMBA website, “this is the most prestigious honor granted by the organization, and is given to bright, radiant, and shining leaders whose work and contributions reflect NSHMBA’s mission “to foster Hispanic leadership through graduate management education and professional development in order to improve society”. This was my first nomination for the award, and I was honored to have received this award based on both my professional accomplishments and more than a decade of leadership in the Hispanic community driving initiatives to improve educational and career opportunities.

I could not have received this award without the help of many individuals along the way, so I would like to thank some of them here:

First, my wife, Christine Chen. Running the Seattle Chapter as President these past two years is akin to having a second full-time job, and working at Microsoft is already more than a full-time commitment. She has been extremely supportive of the amount of time and energy that I devote to the organization and to Microsoft, and has even volunteered to serve on the NSHMBA Board to show her support and provide her expertise to advance the mission of the chapter. Had she not been so supportive, I would not have continued to grow the chapter to what is has become, so she is most directly responsible for the success that I have achieved. I cannot thank her enough.

Second, to the NSHMBA Seattle Board Members, volunteers, and student liaisons, who volunteer their time to drive our mission and grow our chapter. I am very grateful for the amount of their own personal time that they sacrifice for the benefit of others. Among this group, I would like to commend a few exceptional individuals who have gone above and beyond the call of duty:

The awards ceremony was held on Saturday, October 10, 2009 shortly after the end of the NSHMBA National Career Expo. I had spent the previous two days at the Microsoft booth helping the MBA recruiting team talk to prospective candidates. The Brillante Awards ceremony was a very nice ending to a great conference. In lieu of acceptance speeches, the NSHMBA team selects a topic that helped the recipient receive their award. My topic was the student liaison program (which I blogged about previously).

After the awards ceremony, the entire audience was treated to a concert by Latin-Grammy awarding winning singer, Alejandro Fernandez. Post-party salsa dancing at Picosa was difficult to get into, but a great time nonetheless. Overall, I had a fantastic time and will cherish the memories and the award for many years to come. Below are some pictures of the event (with the Student Liaisons and with my wife). 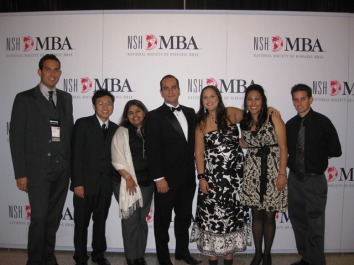 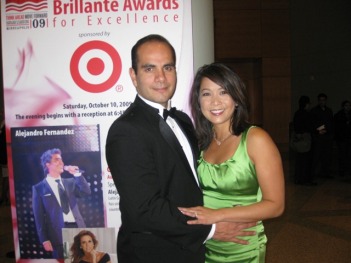 Posted by Richard Velazquez in Awards on August 26, 2009

2009 Recipients to be honored in Special Publication on Sept. 11th and at Special Event on Sept. 15th

“Puget Sound Business Journal’s 40 Under 40 program celebrates its 11th year as the region’s premier award program that spotlights the top business leaders under the age of 40 who excel in their industry and show dynamic leadership,” said Emory Thomas Jr., publisher of the Business Journal.  “Help us celebrate the 2009 honorees as they take their place on our prestigious 40 Under 40 roster at an awards event on Sept. 15, 2009.”

The event is open to the public and tickets are available at:  http://seattle.bizjournals.com/seattle/event/5614

Haas School of Business Article on my National Award

Posted by Richard Velazquez in Awards on March 9, 2009

In March 2009, the NSHMBA National Office selected me as one of their three ‘Rising Stars’.  My Director of Executive Communications (and fiancee) issued a press release for this distinction which garnered some nice pubclicity for our chapter.  In the March 3, 2009 edition of the Haas Newswire (an online publication for the Business School of the University of California, Berkeley), I was featured for this award.  The article can be found here: http://www.haas.berkeley.edu/groups/newspubs/haasnews/archives/hn030209.html#story6
I am very grateful for all of the Executive Board Members of the NSHMBA Seattle Chapter (http://seattle.nshmba.org/board.asp)  for the work that they do in making our chapter a success.  I also want to thank Christine for her help in driving awareness of our chapter and of this recognition.