Thor–The Goddess of Thunder; Why Marvel’s Change is Brilliant and Lazy 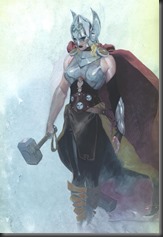 Today I read that Marvel plans to completely reboot the Thor franchise and transform the son of Odin into the daughter of Odin, a hammer-wielding Goddess of Thunder. One of my first thoughts when I read this was that this is a brilliant but lazy business decision.

How is it brilliant and how is it lazy? Well, the reasons are intertwined in the decision itself.

[[UPDATE: After reading the Time article about Marvel’s decision that describes more elements about the story, I’ll backtrack somewhat on the lazy part.  This is not a reboot as some of the articles online have described, but a continuation of the story with a female who now wields Mjolnir, with the original son of Odin no longer wielding the hammer and calling himself Thor.  With respect to the creation of new female heroes and hiring female creators as outlined below, I would still say it’s somewhat lazy, but the decision actually goes into more of a creative direction than I originally thought.]]

Marvel understands the growing purchasing power and influence of females in geek culture. Ticket sales to comic-based movies and comic conventions and video game sales are ever increasingly coming from women. 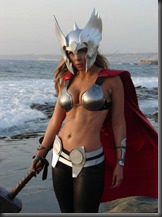 Going even further, female cosplayers acting out their favorite comic characters have millions of followers on social media and are a marketer’s dream (as a matter of fact, the artists at Marvel can simply use popular female cosplayer Toni Darling’s interpretation of Thor as the basis for their concept sketches). Marvel has stated that the purpose for the change is to bring new readers and to appeal to women and girls whom have long been ignored in comics. Thus, they’ve properly identified this audience as a target for expanding their business.

So, to tap this audience, they have multiple avenues they can pursue. They can hire more female staff writers and artists and invest in creating powerful female characters with their own unique back stories, powers, and story arcs. However, developing new heroes takes significant time and marketing dollars to build awareness, interest, and fans. It also takes a greater commitment to follow through. The other option is simply to turn a popular male superhero with a pre-existing fan base into a female. The awareness is already built in with both the fans and, if the character is popular enough, general audiences with some pop culture knowledge. The marketing is also far less expensive, as the likely controversial decision will garner significant news coverage and discussions on internet forums, being buzzed about until at least the launch of the first comic. Additionally, they are likely using the same team members so they don’t have to hire anyone new for a completely new line (I noticed in the Marvel announcement that the writer, artist, and editor are all male – Jason Aaron, Russell Dauterman, and Wil Moss, respectively).

Having worked in the video game industry and participated in marketing and business meetings to identify strategies for expanding to the female audience (many times in rooms filled only with men), I can almost envision what happened in the corporate meeting rooms at Marvel before they came to this decision (note: the dialogue below is pure speculation based on experience):

Marvel Exec: “Team, we’ve all already identified that we need to appeal more to women and girls. I want suggestions and I want a plan coming out of this meeting.”

Pat in Marketing: “We’ve developed a ton of conceptual ideas for a new line of female superheroes, powerful characters that can be great role models as well. We’ll weave their story arcs into pre-existing franchises like Spider-Man and X-men to build credibility and awareness. We’ve also got several job openings for artists, inkers, and writers and we’ll target hiring as many women as we can for these positions to further build the credibility of the characters and stories. The headcount will cost about half a million dollars a year and we’ll need at least three million dollars in marketing for the first year to build awareness and promote these new characters throughout different channels”.

Bob in Marketing: “We can add ‘Woman’ to the end of an existing character and we won’t have to spend as much on marketing. Say, ‘Iron-Woman’?”

Marvel Exec: “No, it’s been done and we know those franchises don’t even come close to the sales of the main character’s franchise. Look at She-Hulk and Spider-Woman. Even our friends at DC haven’t had much success with Super-Girl. Is that all you folks have?”

Jesse in Marketing: “Well, we can just change an existing male character into a woman. You know the forums are already blazing with misogynistic guards of the old order battling women and their male supporters, so the change will add fuel to the flame, generating lots of potential stories and social media references. We’d require very little if any marketing dollars. ”

Marvel Exec: “Hmm, we won’t have to hire anyone new since we’ll just convert the existing team to work on the new character. The controversy will be good for building positive PR, buzz, and awareness. We’ll probably lose a portion of the fan base, but we’ll make up for it on that portion that is curious about the change as well as the new readers, plus we’ll be darlings in the industry for promoting positive change. Excellent, excellent!! ”

Jesse in Marketing: “It would have to be a character whose name doesn’t end in ‘-man’ or already have a female counterpart. So, Ironman is out. Preferably a character that we’ve already developed into a movie franchise to get the halo effect of general public awareness. Someone like Daredevil? No, no, wait, that movie was a miserable failure, we can’t tie it to that. Maybe one of the Avengers? They already have huge mainstream popularity from the movie, so a ton of people outside of comics already know about them. Hulk is out, so maybe Captain America or Thor?”

Marvel Exec: “Great thinking. Captain America outsells Thor, plus he’s the First Avenger, so we can’t take too much of a risk there. Additionally, he’s based on a Captain in the US military during the second World War. More people know about that than they know about Norse mythology, so Thor is the better bet here. Alright team, we’ve got our plan! Jesse, go tell the creative team about our decision and have them sketch up a concept so we can draft a press release. Let’s GO GO GO!”

When I was a kid, I mostly knew Thor because I was a fan of ancient mythologies, including Greek and Norse. I had very little money and had to make trade-offs on buying small indulgences, so I split my purchases between comic-books and D&D books. Thus, I only bought comics about my favorite heroes including Spiderman and the X-men and I probably only have one or two Thor comics in my entire comic collection. While I’m not yet a fan of this change to the character, I will likely go out and buy a few copies of the first comic-book of the new female Thor out of both curiosity and because it may be valuable in the distant future – making this the first Thor comic book I’ll purchase in about 30 years.

As I said, lazy, but brilliant.

This entry was posted on July 16, 2014, 9:19 am and is filed under Brand, Business, Entertainment, Hobbies, Marketing. You can follow any responses to this entry through RSS 2.0. You can leave a response, or trackback from your own site.